Kendo, which translates to the way of the sword, is a martial art form developed in Japan to develop swordsmanship which was an integral part of being becoming Samurai. The Samurai, and the Samurai feudal system, was how Japan operated as a nation and culture for 1000 years or more and is still identifiable in Japanese society today. Samurai was a fundamental way of being that was most notably recognised through swordsmanship but being Samurai was to follow many important virtues. Kendo was the way that allowed a person to practice and improve and it was through the practice of Kendo that a person was able to develop their ability to live these virtues. Our interest lies with how Kendo delivers a more profound and pervasive way of being that leads to a purposeful and powerful organisational culture. When the earthquake and tsunami struck the town of Fukushima in Japan in 2011 setting off a nuclear disaster, 200 people over the age of 60 volunteered to take the front line of the crisis. Why? The volunteers said the dangers of radiation should be faced by them, and not the young. This story highlights the understanding and importance of putting the good of others before one’s self. You cannot arrive at these outcomes through politics or planning. It comes from something deeply ingrained in people, in what they believed and how they behave as a result. The Art of Kendo aims to mould the mind, body, and spirit. In The Kendo Way, this translates to moulding the individual, processes and procedures and culture to create an environment that inspires performance. As a martial art, Kendo is practised with groups of people wielding bamboo swords. The Kendo Way is focussed on teams within an organisation, wielding technology instead of swords, working collaboratively to achieve the organisations’ purpose and objectives. 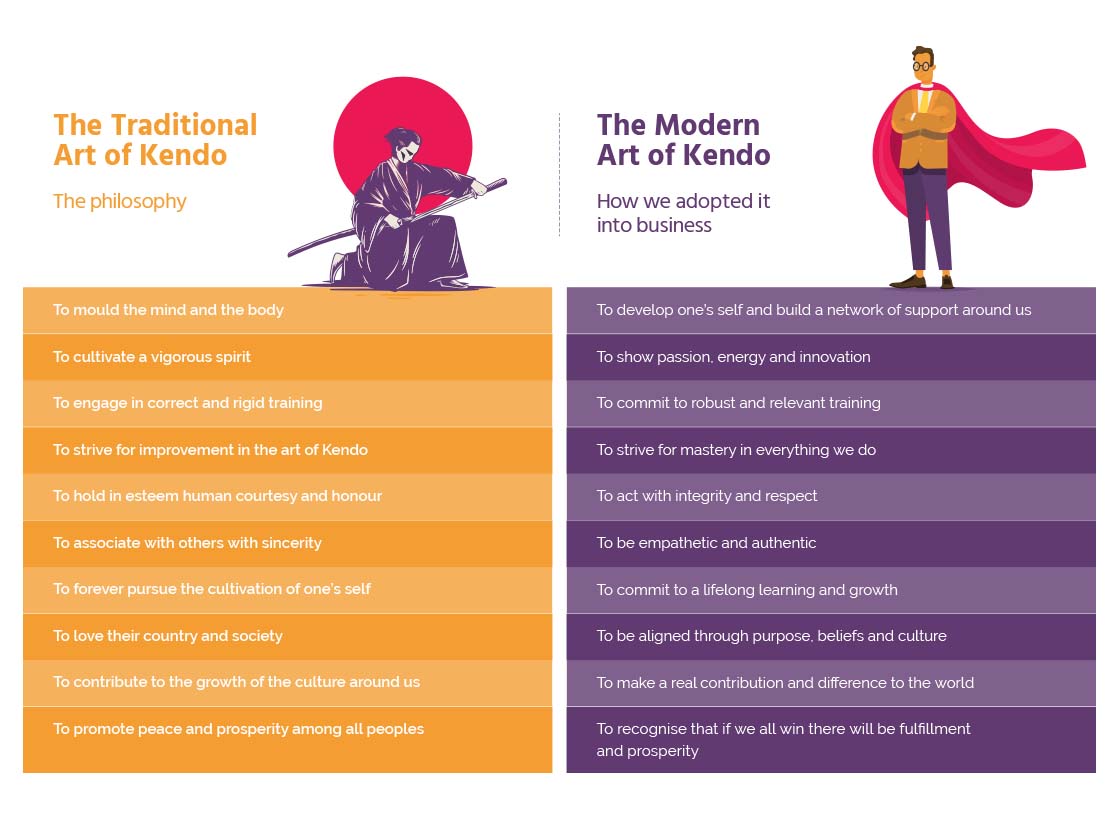 The Art of Kendo looks beyond the improvement of one’s self with the sword, into how we behave as a community, to sincerely hold others in esteem, to be courteous and to honour those around us. The Kendo Way is focused on how we work together, with respect and trust, to build a better outcome for everyone by focussing on the team and the organisation over self, and long term over immediate results.